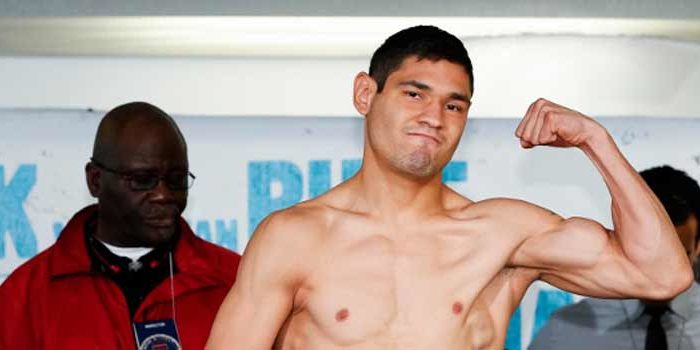 Los Angeles, CA –  Latin Sports, a leading Hispanic Sports Promotions and Management Company announced that one of its premier boxers, Rogelio “Porky” Medina (37-7, 31 KOs) will clash with David Benavidez, an undefeated rising contender (17-0, 16 KOs) this Saturday, May 20th, at the Laredo Energy Arena in Laredo, Texas.

A very motivated “Porky” Medina (pictured)Rp stated, “All I read about in the media reports are how great David Benavidez is and how he is a future superstar in boxing.  I respect my opponents but let’s get real…who has he fought?  I have gone up against the best in this division and no one will get in the way of my next title shot.  I will be ready to go this Saturday night!”

The winner of the Medina vs Benavidez match will secure a mandatory position in line for a WBC super-middleweight title fight.

This match will be a special edition of Premier Boxing Champions and will broadcast live on FS1 (Fox Sports 1) and FOX Deportes at 7PM Pacific, 9PM Central and 10PM Eastern Time.

Carlos Moncada of Latin Sports commented, “We embrace the role of the underdog, when everyone is talking about the other fighter.  Porky will let his fists do the talking in the ring this Saturday. This will be a major war and we look forward to Rogelio “Porky” Medina winning and earning another opportunity to fight for the title.”

Kicking off the day will be an action-packed 130-pound championship match with undefeated young star Gervonta Davis (17-0, 16 KOs) defending his title against No. 1 contender Liam Walsh (21-0, 14 KOs) from Copper Box Arena in London, England with coverage beginning on SHOWTIME at 6 p.m. ET/3 p.m. PT.