“It seems like yesterday that we started the New York State Boxing Hall of Fame but here we are in our sixth year,” NYSBHOF president Bob Duffy said opening the festivities. “I’ve been asked what VIPs were coming here and I said the 15 inductees are VIPs.   This is how we remembers our New Yorkers in boxing.  We recognize them for their achievements in boxing and all of them are great guys, too.”

“Today is a validation of their (inductees’) careers,” added Ring 8 president/Chairman of the NYSBHOF Induction Committee Jack Hirsch.  “This is a great honor for all of them.  Congratulations to all of the honorees.” 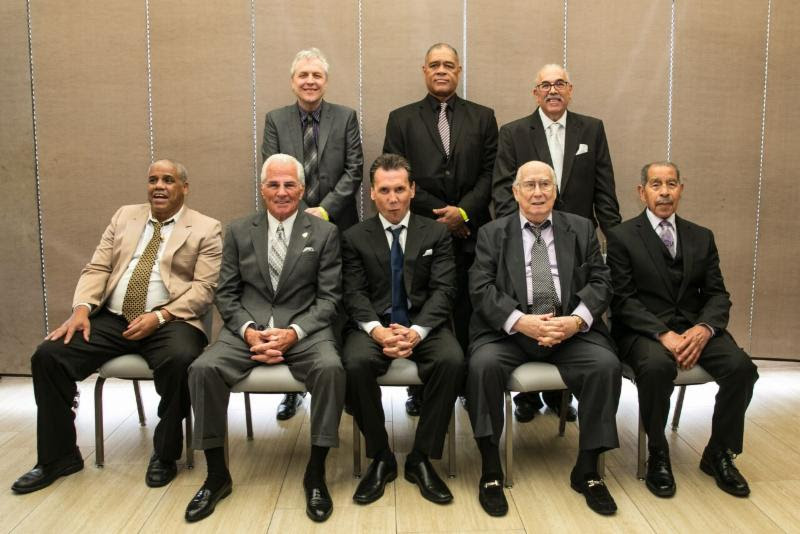 Each inductee will receive a custom-designed belt signifying his induction into the NYSBHOF.

All boxers needed to be inactive for at least three years to be eligible for NYSBHOF induction, and all inductees must have resided in New York State for a significant portion of their boxing careers or during the prime of their respective career.

Past world champions and NYSBHOF inductees Iran Barkley, Vito Antuofermo and Mark Breland were in attendance, as were retired boxers and others such as Dennis Mitlon, Bobby Miller, Jimmy Lange and Richard Brown.

Gasper Ortega: “I’m very honored to have people come out to honor me.  It’s truly a pleasure to be here. I want fans to know how much I appreciate their support.  Right now, I feel like a champion; I’m on top of the world.”

Stan Hoffman: “A lot of things have been said about me in boxing and I’m grateful for the success I’ve had in boxing.  I wish I had 200 friends but the problem is I [probably have a 1000, so I can’t name them all today.  This is special because I’m going into the Hall of Fame the same year as my godson, Ron Katz, who was the best matchmaker.  He’s terrific.  Boxing has been good to me.”

Ron Katz: “During the past 42 years, I’ve had the pleasure of working with so many great fighters, over 200 world champions.  I’ve had the pleasure to work for some great promoters, to say I’ve world for some of the giants of this industry is an understatement.  I learned so much from Johnny Bos, Mickey Duff, Bruce Trampler and my mentor, Teddy Brenner.  I’m so grateful to them.”

Doug Dewitt: “I could have done better in the Tommy Hearns fight.   Took Robbie Simms too lightly but I won the rematch.  I was No. 3 (in the world) and I was going to fight Marvin Hagler, who was world champion when there was only one.  Boxing is a tough business.  I’m not walking around like I used to 20 years ago.  I had some good teachers.  I had a good career, I wouldn’t call it great.  Thank you very much.”

Renaldo Snipes: “I have a lot of friends. I had a lot of enemies but now they’re friends. You have to know how to get along with everybody even though you had to fight some in the ring.  You can’t go into the ring without freaking killer instinct.  I’d like to thank everybody who supported me.  I took what I learned in boxing and took it into the business world.”

Bobby Bartels:  Dick Tiger wanted me to go to Africa with him but I said I couldn’t.  I wish I had gone with him.  When I was in Stillman’s Gym sparring, Gasper helped me a lot. He’s a beautiful man.  I want to congratulate all the inductees.  It’s great to be inducted into the New York State Boxing Hall of Fame.  It’s been a long road from the gym, through Golden Gloves, becoming a judge, and then Ring 8 president for nine years.  This is the icing on the cake.”

Alex Ramos:  First, I want to thank the New York State Boxing Hall of Fame and everybody here from the bottom of my heart.  I want to thank Shelly Finkel, who did so much for me, and all the people who trained me.  I was my own problem. I had a brain injury but it’s great to be alive.”

Don Majeski: “I have much to be humbled about.  I congratulate all the inductees for their hard work and incredible contributions to boxing.  I’m a beneficiary for all the fighters who gave me a chance to be a small part of their careers.  This is a great honor, probably the only one I’ll ever get.  It’s been a wonderful life in boxing the past 50 years.”

About Ring 8: Formed in 1954 by an ex-prizefighter, Jack Grebelsky, Ring 8 became the eighth subsidiary of what was then known as the National Veteran Boxers Association – hence, RING 8 – and today the organization’s motto still remains: Boxers Helping Boxers.

RING 8 is fully committed to supporting less fortunate people in the boxing community who may require assistance in terms of paying rent, medical expenses, or whatever justifiable need.