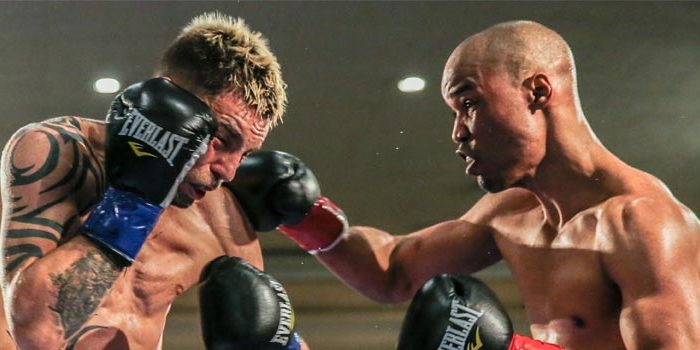 Starting slowly and tactical in the first round, both fighters threw caution to the wind commencing with the second stanza as the relentless, attacking style of Redkach clashed with Mendez’s more precise combinations. Throughout the fight, numerous clashes heads of heads took place with the southpaw Redkach and orthodox Mendez working to find their footing.

Redkach, a member of the 2008 Ukrainian Olympic team, now living in Los Angeles was also the victim of sometimes unique judgments by the referee, Raul Caiz Jr. In the third round, Redkach was deducted a point without prior warnings for rabbit punches.

With Mendez of Brooklyn, New York, scoring consistently with strong combinations, Redkach started loading up in the second half of the fight including two knockdowns, one each in the seventh and eighth rounds, neither of which were properly scored by the referee.

Stated a visibly upset Redkach, “The judges were wrong. I won that fight.

“I felt that I knocked him down and the referee didn’t call it and he took the point away and that cost me. I never felt any pain. I fought like I wanted to and I thought I did enough.

“They were wrong. This was my night.”

Said the happy and victorious Mendez, “I used my skill and my speed throughout the fight, but I waited to come forward until the fourth or fifth round. I knew he wasn’t going to be able to knock me out because I have great defense. I see every punch.

“I definitely slipped both times I went down. He didn’t even hit me.

“Ivan is a tough warrior. He throws a lot of wild punches and he hit me in the back of the head several times. I thought the scorecards were too close. I thought I won by a much larger margin.”

Battering away with a piston like jab and heavy handed left crosses throughout the fight, southpaw Figueroa displayed a full arsenal over the valiant but outgunned Saavedra.

Said Figueroa, “I worked the body and tried to finish it in the later rounds, but he was a tough opponent. I knew by the third or fourth round that it was going to be a really tough fight so I kept my distance, but kept trying to punish the body.

“He is a Mexican fighter that has never been knocked down so that says a lot about him right there. I knew he was going to be tough.

“I want to wait and fight next on a card with my brother and it depends when that will be, but I will be ready.”

Countered Saavedra, “He kept hitting the body, but he couldn’t take me down. He isn’t as tough as everyone says.

“I was prepared, but the travel here took a lot out of me and I didn’t feel 100 percent today. I trained 100 percent, but I wasn’t at my best in the ring, but that is how it goes.

“I wish Brandon the best of luck in his career.”

Firing away from the opening bell, both young prospects threw caution to the wind with Torres’ punches doing the great damage.

Said the victorious Torres, “I stuck to my game plan. I went forward and tried to counter every punch. If he threw one, I would try to throw five. I never really felt his power. He hit me with a good shot in the first, but after that I wasn’t fazed.

“I was motivated by all the fans cheering me on in the crowd and knowing I had a lot of people rooting for me watching at home. I really appreciate the support and can’t wait to get back in the gym.”

Stated a disappointed Santa Cruz, “He was applying a lot of pressure. He is shorter than me, so that was his game plan and it worked.

“He has good experience. This was my first six round fight. He had fought 10 rounds before. Not trying to make excuses though. He just got the better of me. I came prepared, but he did what he had to do to win.”