In May 1995, Ike Quartey fought Jung-Oh Park on HBO’s Pernell Whitaker-Julio Cesar Vasquez card. It was his first bout on a major American network.

“Park was tough, man,” Ike says. “I have a scar under my mouth from that fight. I was really feeling his punches in the first round, so in the second I stood my ground so I could see where the shots were coming from. I didn’t know he was feeling my punches more than I was feeling his.”

Quartey poured it on in the third, turning Park’s face into a swollen, bloody mess. The fight was stopped midway through the fourth. Park had suffered a broken jaw.

“All the HBO people were like, ‘who is this guy?’” Quartey says. “Larry Merchant became one of my biggest fans. I think he’s one of the smartest people in boxing (laughs).”

Quartey returned to HBO in April 1996 against Vince Phillips. He says that Merchant warned him not to take Phillips lightly.

“Vince hit me harder than anyone I fought,” Quartey admits. “I wasn’t surprised when he knocked out Kostya Tszyu after we fought. He hurt me in the second round but I smiled and got close because I wanted to smother his right. One round later, I put him away.

“Phillips ran into Whitaker afterward and told him to stay the hell away from me. That I might even knock him out. He and Whitaker had a big argument.”

“Sweet Pea” wasn’t convinced but the rest of the boxing world began taking notice. Quartey’s name could now be found on pound for pound lists and his style was fan-friendly: An unrelenting boxer-puncher with a piston-like jab considered the best in the sport. Quartey’s signature punch not only set up the right, it hurt just as much.

In a stacked welterweight division that included Whitaker, Oscar De La Hoya, and Felix Trinidad, Quartey was considered the darkhorse. In October 1997, he took on Jose Louis Lopez, a talented 24-year-old who De La Hoya once said had the best chance of beating him. In 1996, Lopez battered a prime “Yori Boy” Campas until Campas retired on his stool after only five rounds.

Lopez’s weakness was poor work ethic. His trainers isolated him for two months in preparation for this fight. Meanwhile, Ike battled malaria throughout camp. Promoter Dino Duva wanted to call the fight off.

“Ike was adamant about fighting,” Odamtten says. “I’m sure the paycheck had a lot to do with it but he was in no condition to fight. I was really scared during that fight because I knew if Lopez caught him he would be in trouble.”

Quartey says the plan was to avoid exchanges and pump the jab; he landed a CompuBox-record 313 of them. Lopez scored a knockdown in the second when a right caused Ike’s glove to graze the canvas. In the 11th, an even harder right sent Ike tumbling to the mat. Quartey controlled most of the other rounds. He won a majority decision. 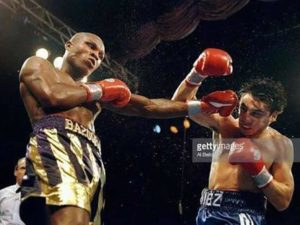 “Nobody wanted to fight Lopez,” Ike points out. “At the after-fight party, he walked over and grabbed my hand and said, what’s inside these? My face is still burning like pepper.”

“I was so impressed with Ike that night,” Odamtten says. “I know what he went through. He was really sick and I didn’t want us to go through with that fight.”

Two days later, a tallying error was discovered that changed the win to a draw. Quartey, now 34-0-1 (29 KO’s), was going through changes outside the ring as well. He and the Acaries brothers had a contentious split and he was now promoted by Main Events.

That Main Events connection led to an April 25th showdown versus stablemate Pernell Whitaker, but the bout was cancelled when Whitaker tested positive for cocaine. Even worse, the Acaries brothers had won the WBA purse bid for Ike’s mandatory defense. Ike wanted no parts of that bout, fearing a robbery if it went to the cards.

The WBA stripped him for failing to face his mandatory. Fellow titlist Trinidad agreed to fight Ike in November, but “Tito” had his own promotional issues with Don King. As Trinidad and King battled in court, Top Rank’s Bob Arum swooped in with an offer Ike Quartey couldn’t refuse: A November 21st bout against De La Hoya and a $4.6 million purse. Quartey’s date with destiny had arrived.

PART ONE CAN BE READ HERE: https://www.boxingafrica.com/ikequarteyspeaks

Check back on BoxingAfrica.com for more on Ike Quartey and Ghana boxing!