Zongo Junction is one of the busiest areas in Ghana’s capital city of Accra. Seas of pedestrians zig-zag around vehicles to cross unmarked roads. Taxis battle Trotros for road space like two kids fighting over a small blanket. And roadside sellers pace up and down the streets, peddling everything from fruits to puppies.

A contemporary office building one block away stands out amidst the chaos. Issifu “Ike” Quartey, proprietor of this four-story edifice, had it constructed during his fighting days. Other Ghanaian athletes prefer to build in upscale areas but Quartey likes to keep his ear to the street. 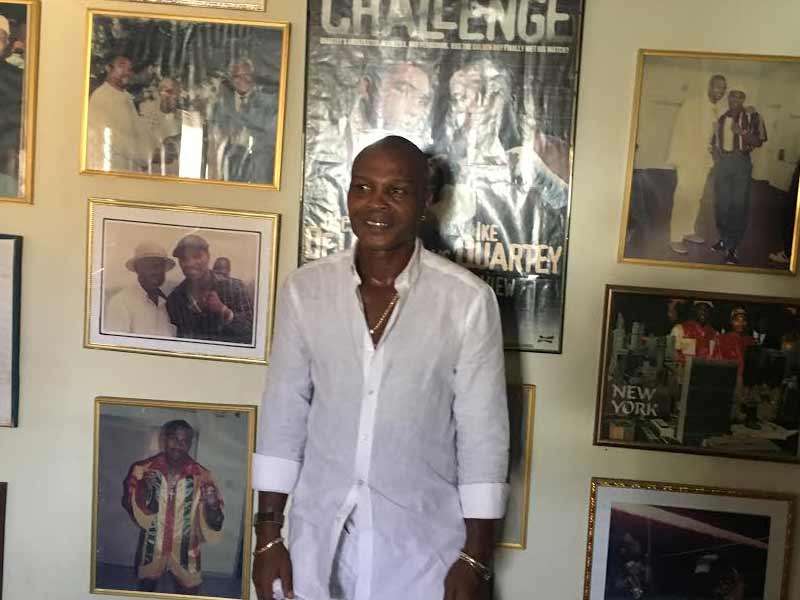 Ike’s private suite inside is replete with photos and memorabilia from his career. The walls in the waiting area are nearly bare, except for a framed Quartey-Vernon Forrest fight poster hanging in the shadows.

It’s a night Ike would like to forget—and presumably why he keeps the poster away from his inner sanctum. Quartey ended a five-year hiatus from boxing in 2005. The Forrest fight was his first HBO headliner since April 2000.

A victory might’ve meant another world title shot. After 10 rounds, most thought he’d won. The judges, though, awarded Forrest a unanimous decision. It took a few seconds for the Madison Square Garden crowd to digest Michael Buffer’s words before expletives pelted the theater.

“I didn’t want to fight anymore after that,” Quartey recalls. “I fought one more time and that was it.”

Quartey still lives comfortably, judging by his multiple properties, the late model cars parked outside this one, and the gold ornaments he dons like an ancient African chief.

It’s been ten years since Ike last climbed through the ropes. He remembers every step, beginning with a harsh upbringing in the fishing town of Bukom. The Quartey’s were a fighting family. Father Robert Mustafa was a court bailiff and respected street fighter. Ike’s half-brother Clement won silver in the 1960 Rome Olympics, becoming the first Ghanaian to medal in Olympic games.

Issifu was the last of 27 children (not a typo—27). Naturally, he wanted to follow in big bro’s footsteps. He even adopted Clement’s “Ike” nickname (some say against his sibling’s wishes).

By eight, he became a regular at the renowned Akotoku Academy Boxing Gym. Attuquaye Clottey, Akotoku’s lead trainer, was a man Azumah Nelson called, “One of the greatest boxing coaches Ghana has ever produced.” It was Clottey who taught Azumah the importance of balance, when and how to apply power, and defense.

One of Clottey’s hired hands was 13-year-old Daniel Odamtten. Odamtten kept the gym together when Clottey died, organizing sparring sessions for neighborhood kids.

“I didn’t recognize Ike Quartey as having any special talent at first,” Odamtten says. “The person that everyone thought was going to be a world champion was Alfred Kotey [Kotey briefly held the WBO bantamweight title]. Alfred went with manager Yoofi Booham to work with J. Russell Peltz. Ike became my prized pupil.”

Odamtten remained Ike’s trainer until the latter retired in 2007. Ike was 50-4 as an amateur, earning a selection to Ghana’s 1988 Olympic squad. At those games in Seoul, South Korea, he befriended Roy Jones Jr., the man whose Pensacola, Florida gym became Ike’s second home.

“In boxing, the great champions were great amateurs,” Ike notes. “Most are Olympians. Look at the 1984 and 1988 teams. Look at Oscar [De La Hoya] in 1992, [Floyd] Mayweather in 1996. If Ghana is serious about boxing, the government will build the amateur program. If you’re Ghanaian and you can’t rise above the local level to compete in the Olympics, you can forget it.”

Quartey turned pro two months after the Olympics ended, powering through his first 16 opponents. He was nicknamed “Machine Gun” by Don King after stopping former amateur standout Kelcie Banks. As he honed his skills, Booham amended the name to “Bazooka.”

In April 1992, Ike and Ghana’s under-23 soccer squad were on the same flight to Italy. The players were invited to watch him fight. Their chanting and drum playing during the card convinced many in attendance to stick around to watch Quartey. The Acaries Brothers, promoters based in France, were among that group. Ike stopped Alfredo Juarena in five. The Acaries’ signed him to a promotional agreement shortly after and relocated him to France.

In France, Ike and a young southpaw named Ronald “Winky” Wright trained together under Odamtten and trainer Louis Acaries. It’s no wonder that their styles, an aggressive, jab-heavy approach behind a high guard, mirror each other.

“Winky and I never sparred,” Ike says. “We were good friends; his room was right across from mine. When I fought for my first world title in 1994, Winky was on the undercard.”

“Espana was supposed to move up and fight Terry Norris after me. He was going to use me as a stepping stone,” Quartey said.

Espana and Quartey warred for 10 rounds. With the fight still up for grabs, Quartey stopped him with a 15-punch salvo in the 11th.

Ike Quartey was now a world champion, but fellow Ghanaians were too busy mourning Azumah Nelson’s recent retirement to notice. “The Professor” cast a large shadow Ike spent his career trying to escape.

CHECK OUT PART TWO OF “IKE QUARTEY – REFLECTIONS ON A CAREER” HERE: https://www.boxingafrica.com/ike-quartey-speaks

Get all your news on Ike Quartey & Ghana boxing right here, on BoxingAfrica.com!