NATIONAL HARBOR, MD. (May 11, 2017) – Featherweight world champion Gary Russell Jr. hosted a media workout Thursday along with his brothers and rising prospects Gary Antuanne Russell and Gary Antonio Russell before all three brothers enter the ring on Saturday, May 20 live from MGM National Harbor in Maryland.

Tickets for the live event at MGM National Harbor, promoted by TGB Promotions, are priced at $200, $150, $100 and $50, and are now on sale. To purchase tickets go to http://mgmnationalharbor.com/.

The 2016 U.S. Olympian Gary Antuanne and unbeaten bantamweight prospect Antonio Russell (7-0, 5 KOs) will compete in separate undercard attractions on May 20 as the three brothers will fight on the same card for the first time as pros.

Here is what the participants had to say Thursday from the Enigma Gym in Capitol Heights, Maryland:

“My weight is perfect. We did a 30-day weigh-in and I was about 132. I’m about 128 right now. I feel comfortable. If we can’t get a unification bout, I’ll move up in weight though. I understand why people haven’t wanted to fight me. It’s a business and I understand that.

“The postponement didn’t bother me. I can’t get upset about stuff that I can’t control. When you have two elite athletes pushing themselves to the limit, injuries occur. It gave me more time to rest my body properly. We’re definitely ready now. 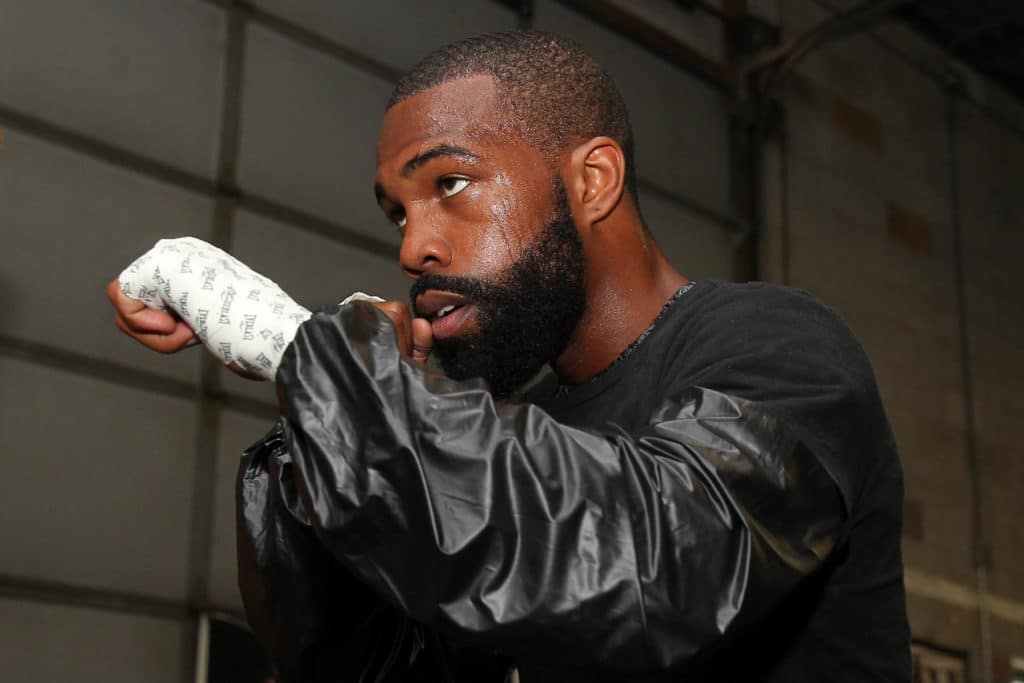 “I haven’t fought anyone as short as him, but that’s the purpose of training camp. We bring people in who have a similar style to Escandon. We’ve gotten great work in and I feel prepared.

“It’s easier against a more aggressive guy. It’s hard to go after someone who is retreating. He’s going to bring it right into my face.

“We come to the gym and grind every day so we can be the best we possibly can. On fight night, it’ll all come to fruition.

“It’s going to be history in the making. We’re in familiar territory with making history. We were the first set of four brothers to win the National Golden Gloves and I don’t see anyone breaking our record any time soon. I believe in a dynasty and I’m excited for my dad to see all of his hard work come together on fight night.

“When you focus on the magnitude of an event you take away from the true focus that we’re supposed to have. My goal is to become victorious. But it’s definitely cool that the people from my hometown will be able to be a part of the event.”

“We plan on giving our father a gift that he can’t buy on his birthday May 20. There’s been a lot of sets of two brothers but there’s never been three as far as I know. There have been the Klitschkos, the Dirrells and the Charlos, but those are just two. We’re breaking new ground.

“This sport is brutal. Anyone who steps into that ring has to have a certain amount of intelligence, heart and character. It takes a different kind of individual to get in there alone knowing the other person is trying to take your head off.

“Gary Jr. is my vision. I needed a role model and there he is. I needed someone to keep my humble and keep me out of trouble.

“Me and my whole family talk a lot and about everything. Not just about the sport of boxing. Boxing is what I do, but it’s not who I am. I’m a class valedictorian and I graduated with the highest GPA in Prince George’s County. Don’t just look at me as a jock. That’s what we tell anybody.

“Real estate is in my future. We’re going to own our own properties and be the shot callers. I’ve been getting educated from my brother and my father.

“It’s amazing what my dad did, but you can’t forget about my mom. Behind every king is a strong queen. My mom is the most important woman in my life. Other than that, it’s tunnel vision. Tunnel vision in school and in the gym or anything else I do in my life.

“I want to give back to my brother. A lot of families leave their children with nothing. We’re all working to leave something with substance for our families.

“What makes the Russell brothers different is that we’re all equal and we get our energy from each other. It’s never about being better at something than your brother, we all want to get through every obstacle together.

“I’d say I should be on the world title level in the next five years. This is a business. We’re going to do this well. That’s what my team talks about.

“We’re looking to build a dynasty and I believe that May 20 will be a memento to our dynasty building. I hope I’m at the championship level in the next five years. We’re going to run this thing correctly.”

“It means a lot but it was all expected. We put in hard work in the gym so I expected us to reach these levels.

“It’s even better to be able to come home and compete. Not all of our fans could make it to our other fights. But being at MGM in Maryland, it’s all coming together.

“I watch everything that my older brother does and I learn from his mistakes. He makes sure that I don’t make those same mistakes. He critiques me every way, through life and in the gym.

“My career is going up. I know my father has my best interest at heart. He’s going to get me the right fights and put me in good positions.

“There is a sense of order in our house. Iron sharpens iron. We all help each other no matter what. We’ll all be victorious on May 20 and it’s going to be a wonderful birthday present for our dad.”

GARY RUSSELL SR., Father and Trainer for the Russell brothers

“The D.C. and Maryland area has always produced great boxers. Right now it’s their time. With Gary, Jarrett Hurd and Gervonta Davis, this is as good as it’s ever been. They represent the sport as gentlemen.

“Gary Antuanne is coming in fresh off of the Olympics. We know he won that fight in Rio, but politics got him. He’s not a normal young fighter. He was a class valedictorian which I don’t think a lot of boxers can say. Antonio has a lot of talent as well and he’s on the rise. It’s going to be a great opportunity to show their skills.

“I’m really excited. It’s unique to have all of these guys from the area showcasing their talent at the same time. I’ve known Jarrett and Tank since they were kids and I’m proud of how far they’ve come.”

ABOUT RUSSELL JR. vs. ESCANDON

For more information, follow on Twitter @MrGaryRussellJr, @TGBPromotions, @MGMNatlHarbor and @Swanson_Comm or become a fan on Facebook at www.Facebook.com/SHOBoxing and www.Facebook.com/MGMNationalHarbor. The event is sponsored by Corona Extra, La Cerveza Mas Fina.