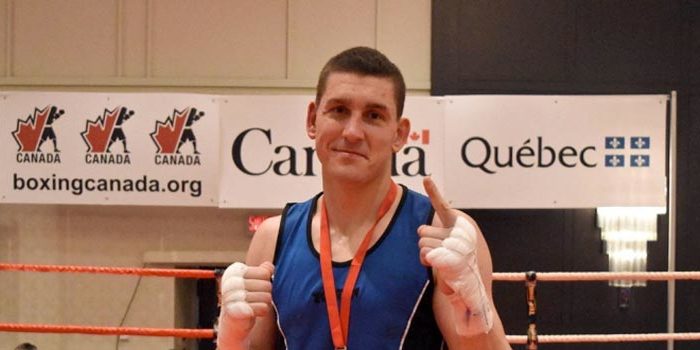 The dream, coming off the pitch in Grade 12 in Fort St. John, was to make the University of Victoria Vikes soccer team. Instead, Bryan Colwell is pounding his way to the 2020 Tokyo Olympics inside the boxing ring.

Canada has had some punch in the heavier categories of Olympic boxing, with Willie DeWit and David Defiagbon winning heavyweight silver at L.A. in 1984 and Atlanta in 1996, respectively, and Lennox Lewis the super-heavyweight gold medallist at Seoul in 1988.

Colwell, of Sooke Boxing Club, looks to follow in that tradition after winning the Canadian amateur heavyweight title in Quebec City last week. That makes the six-foot-two, 201-pounder the nation’s leading candidate in that class for the 2018 Gold Coast Commonwealth Games next April, the 2019 Lima Pan Am Games and 2020 Tokyo Summer Olympics.

The first national team assignment for Colwell is the Canada-Cuba dual meet in Regina on May 26.

“It’s pretty exciting to get in on the ground floor of this cycle,” the 27-year-old converted soccer player said. “I walked into Island MMA under Jason Heit [himself a former pro boxer who started out on Canada’s national amateur team at the 1995 Pan Am Games] and never wanted to play soccer again. I was never a good teammate, anyways.”

The Camosun College business and accounting major found his true calling in an individual sport.

He has a relentlessly dedicated coach at the Sooke club, Ellen Connor, in his corner.

“Ellen is the most passionate coach I have ever trained with,” Colwell said.

“She has been so intense and persistent on the phone in finding fights for me.”

Connor, a corrections officer at William Head, started Sooke Boxing Club three years ago. Now its website proudly boasts that it is “the home of Canada’s heavyweight champion.”

With more to come. Connor’s daughter, 12-year-old Jill Doucette, is an age-group sensation and has already received media attention.

“She’s a natural and wants to fight in the 2024 Summer Olympics,” Connor said.

One to come, the other arrived.

“[Colwell] is now on the national team and on the right track to the 2020 Tokyo Olympics,” Connor said.

“We got him to box. I told him not every punch needs to be a knockout.”

That said, Colwell won three bouts to take the Canadian championship in Quebec City, including a lacerating knockout of Quebec’s Jean-Nicolas Legare in the gold-medal bout.

Meanwhile, Canada’s national boxing team is always at the mercy of their top athletes being lured away by the pro game. That is the nature of the sport.

“I will definitely stay amateur until the end of the year. I am lucky to have two options and both are pretty good — the chance for Olympic gold or maybe going [pro]. I’ll take it as it comes.”

The national boxing team is based in Montreal. Coming from Victoria, home of several national teams, Colwell understands the system and the need to relocate to Montreal.

“There is definitely a lot of support for athletes on the Island with the likes of the rugby, rowing, triathlon and mountain biking national teams located here in Victoria, and the boxers are centralized in Montreal,” he said.

Connor knows it’s part of the process and she must now let Colwell go, as all club coaches must in any sport when their athletes make the national team.

“Bryan belongs to them [national team coaches] now,” she said.

“Everything he needs is with Boxing Canada in Montreal.”

But whether in Sooke or Montreal, these are fists looking to make contact.