Brook (36-1, 25 KOs) and mandatory challenger Spence, (21-0, 18 KOs), clash on SHOWTIME CHAMPIONSHIP BOXING in one of the biggest fights in the 147-pound division, and the elite pairing are promising to deliver an electric night of action.

Both fighters participated in a public media workout today, Wednesday, at Peace Gardens in Sheffield, England. Below is what they had to say:

“We are going to rock Sheffield on Saturday night. I’m ready, I’m pumped, I can’t wait.

“There is a lot of pressure but I always perform better under pressure. I’m meant to be on the big stage, I’m ready for the pressure and to see the bright lights.

“[Errol Spence] is a serious dude from America, he’s a young hungry lion, but he’s not beaten anyone like me. I’m a champion and I’ve been a champion. I’m defending. I know both sides of the coin, I’ve prepared very well.

“There’s no way he can beat me.  I’m a man possessed and I have a serious job to do.  This is my night to shine.

“I love it [being the underdog].  I was born for it.  People don’t have me winning this fight, but that just gives me the extra energy I need to go out and prove them all wrong.

“All the hard work has been done.  The talking will stop; we’re ready to let some fireworks fly now.

“I can see us both maybe hitting the canvas.  You’re going to be on the edge of your seat from round one.  He’s not going to take a backwards step, and I’m not [either].  All I can say is it’s going to be a thriller.

“I’ve arrived.  It’s a dream come true.  It’s going to be so perfect for me that night to walk out and just see everyone.  The electricity is going to be phenomenal.” 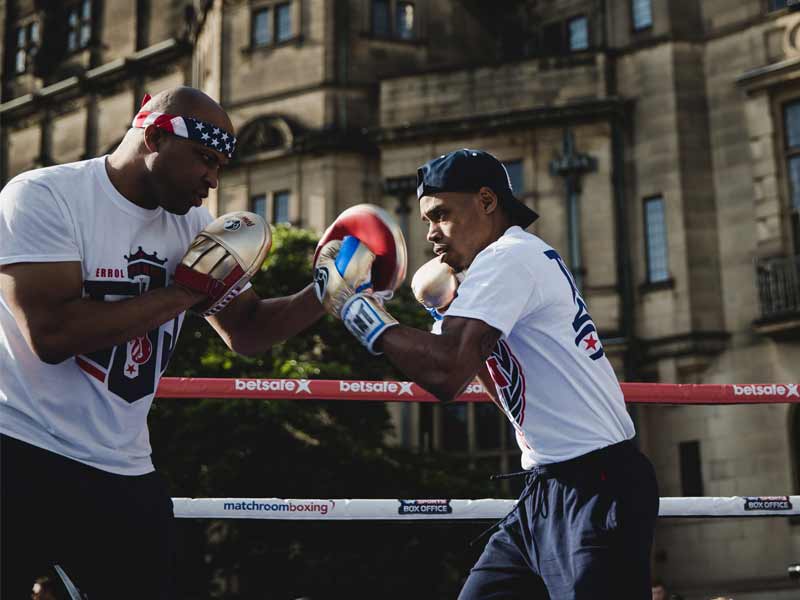 “I can’t let the fans get to me.  I’m not worried about him having his hometown fans.  Eventually everyone will be my fans by the end of the night.

“I don’t feel the pressure at all.  I feel like there is more pressure on him because he’s fighting at home.  Of course there’s pressure on me to win, but I welcome that pressure.  It’s going to do nothing but motivate me, make me more hungry and make we want to win even more.

“It’s a good step-up.  Kell Brook is a good fighter, he has great skills.  I welcome this step-up – I’ve been asking for it for a long time and I’m finally getting my opportunity.

“My confidence comes from my hard work.  I know the hours and time that I put in the gym.”

“This is an ideal situation. I would be disappointed if I was fighting someone else because he vacated. I’m a real fighter, I want to fight the best, I want to fight the champion and earn it the right way.  I can’t wait to prove I am one of the best fighters in the welterweight division.

“I’ve been on the USA team for a long time. As an amateur, representing U.S. in the Olympics and as a pro having this USA patch on me and fighting for my country.  I feel Saturday is kind of like a USA vs UK battle. And  U.S.A. is going to win.”