HOLLYWOOD, Fla. (May 9, 2017) – Heavyweight contenders Shannon “The Cannon” Briggs and Fres Oquendo faced off for the first time today (Tuesday, May 9) before they battle for the WBA Heavyweight Championship on Saturday, June 3 in the main event of Backyard Brawl: Briggs vs. Oquendo taking place at Hard Rock Live at Seminole Hard Rock Hotel & Casino in Hollywood, Fla.

The two-time heavyweight champion Briggs and three-time title challenger Oquendo participated in a highly energetic press conference at Hard Rock Live as both men, along with representatives from their camps, proclaimed victory on June 3. Also in attendance were a trio of former Heavyweight champions who plan on attending fight night including Evander Holyfield, Riddick Bowe and Briggs’ trainer Chris Byrd, adding to the anticipation for the Heavyweight title bout. 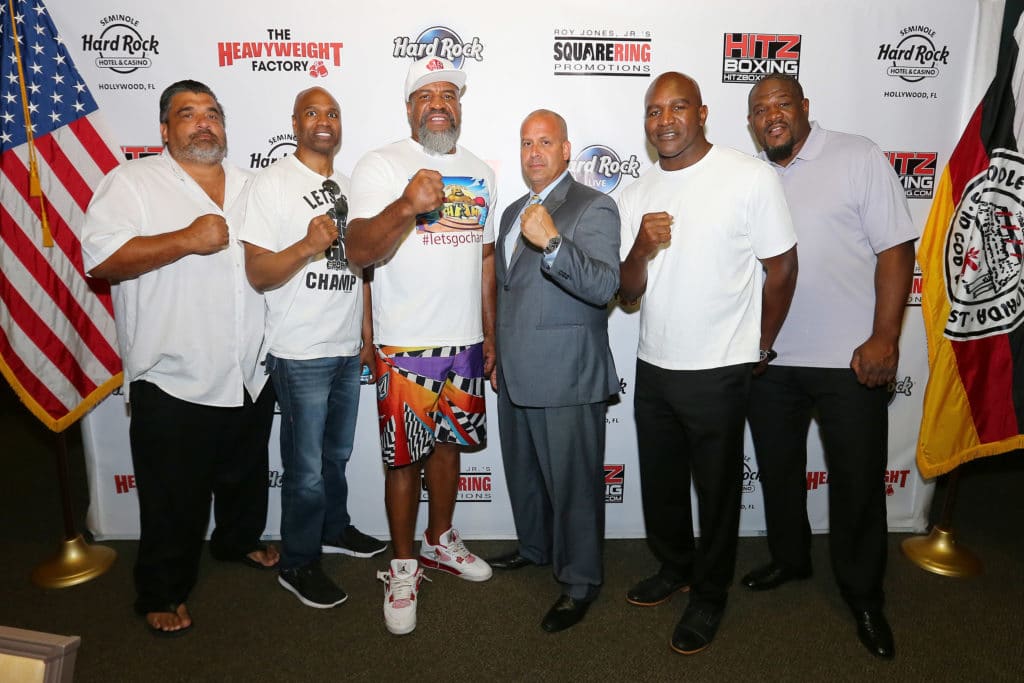 Here is what the participants had to say:

“This has been a long journey. Five years ago, I was depressed and out of the boxing game, but then my daughter was born. I took a stand. I said that I’m going to do this for her. Everyone doubted me. When I met with Kris Lawrence, he listened to me talk for hours on a Monday and then on Friday he called me and said ‘Let’s Go Champ!’ That was the beginning of the comeback.”

“I lost 145 pounds and I went around the world, meeting people and trying to inspire them, but they were inspiring me too. It’s a huge motivation to me to see these people and get the response from people who say that I was able to inspire them.”

“We’re here now. We got the shot. I look forward to becoming a champion for a third time. I’m fighting a very good fighter in Fres Oquendo. He’s a seasoned guy, but he’s out of his league. This isn’t his time.”

“I’ve heard things that he’s said about me, that it might be an easy fight. But he has no idea how motivated and how focused I am right now. I just can’t wait for the bell to ring so that the people can look up and see me smash him.”

“I’m happy and excited. The time is now. I’m home in Florida where I’ve lived for the last 18 years. I’m training like never before. I might have taken two weeks off in the last four years. I’m looking forward to glory. I want to see the people around the world saying “LETS GO CHAMP!”

“It’s a pleasure to be here for this historic event. Shannon and I go way back.  We’re gentlemen of the sport. We carry ourselves with dignity. We’re going to go after it.”

“We actually shared a twin bill on my HBO debut in 2001. That was a special night for me. I’m thankful to Shannon for stepping up and facing a fighter of my caliber. I’m going to go in there with everything that I have. It’s not going to be easy in there for him.”

“I’m dedicating this fight to my son’s friend Jaxon King, who passed away last year at five years old. I have a non-profit that helps a lot of at risk youth in Chicago because I was one of those kids. They all mean so much to me and I’m going to have Jaxon in my heart that day and give me the extra edge to do what I have to do.”

“I’ve been in there with the best in the sport. This is a very special fight for me. This is life and death for me. I’ve fought everywhere in the world, sometimes I didn’t get the decision, but I’m going to bring it every time.”

“I hope to see everyone out there on fight night. It’s going to be a great night of boxing. I can’t wait to make history on June 3.”

“I’m honored to be here and see boxing back. I know that this is going to be a great fight. I wouldn’t miss it. I’ll be there ringside on June 3 here at Hard Rock Live.”

“The important thing is that one of these guys is going to be the oldest heavyweight champion in history. I thought it would be me, but the person who walks out of here will be able to say they did it. It shows that these guys take care of themselves and are dedicated to the sport. I can’t wait.”

“I’m a boxing guy. I love this sport. I’ve known Shannon and Fres for a long time. It’s crazy that Shannon is 45 and still wants to learn every day in the gym. He wants to win this fight so badly. He wants everything he does in camp to be the best, so he can be the best in the ring.”

“It’s scary when Shannon Briggs gets in front of you. The power, speed and athleticism is crazy. I think Shannon Briggs is the best heavyweight in the world right now.”

“I work with many heavyweights before Shannon asked to work with me. I was surprised to see the power and speed that he has. It’s unbelievable. We’ve been working for a couple of years now and he’s always been dedicated to what we do.”

“We’ve got all these great heavyweights here today and I’ve worked with a lot of great heavyweights. Shannon Briggs is one of the hardest punchers I’ve ever worked the pads with. This is going to be the first time that Fres Oquendo will be knocked out.”

“Shannon has been the people’s champ for a long time. The ‘Let’s Go Champ!’ mantra is not just him out there saying it, there is so much behind it. It helps so many people who are out there struggling and I commend you for that.”

“Shannon is going to let his fists do the talking on June 3. The Heavyweight Factory is about teamwork, working hard and results.”

“Anthony Joshua was granted an optional defense by the WBA, so the winner of this fight could be in a great position. The future fights that are coming for these fighters will be great, but neither guy is looking past this one. After this fight, we can talk about everybody else.”

“I wish both fighters the best on fight night. I know who I think is going to win, but I truly wish Fres good luck because he is a true gentleman.”

“We want to thank the Seminole Hard Rock Hotel & Casino for being a great host and everyone should get their tickets now, you won’t want to miss it.”

“Our team is going to come prepared. The talk is all nice, but when he gets in the ring, it’s just going to be the two fighters. We’re going to be like Clint Eastwood and come in to town real quiet and leave with the belt.”

“I promised Fres in 2009 that I’d get him to the heavyweight championship of the world and I did. Now he’s going to do his part and come back with the title. It’s going to be a great fight.”

“We’re really happy to be here and we’re thankful to everyone who helped put this all together. It’s a hard road to glory and Fres has been on a journey that I’ve been with him on since 2008.”

“The last title fight that Fres took was taken on one day’s notice. We arrived in Chechnya an hour and a half before the weigh-in. This is Fres’ real shot. This is the shot that Fres deserves.”

“Once Shannon gets in the ring, he’s going to have to deal with Fres Oquendo. I know what he’s capable of. Fres has never been knocked out and he’s never had to go to the hospital. We have a great team over here.”

“We will see on June 3 who is in shape and ready. Fres has more experience, he’s faster and he’s just as strong as Shannon. We’ll find out on June 3.”

“I have no doubt in my mind that the fourth time is the holy grail for us. We’ve been ripped off too many times. We’re going to win and Fres is going into the history books.”

“Over the years Hard Rock Live has been Florida’s premier destination for boxing. Exciting boxing events have come through here throughout the years. It’s opened its doors to thousands of boxing fans and watched both the next big names step into our ring and seen legendary names win championship titles.”

“We’re happy to welcome Shannon Briggs back after his triumphant win here in 2015. June 3 will see Briggs back in the ring as he takes on Fres Oquendo. We’re very excited and looking forward to seeing history on that night.”

Representing the boxing hotbed of Brooklyn, Briggs (60-6-1, 53 KOs) seeks the third heavyweight world title in his long and eventful career. Briggs became a world champion in 2006 when he scored a 12th round stoppage of Siarhei Liakhovich. Briggs has faced the best heavyweights in the world and won the lineal heavyweight world title from George Foreman in 1997. He also defeated Ray Mercer in 2005, in addition to world title challenges of Lennox Lewis and Vitali Klitschko. He enters this fight as the winner of his last nine contests, including eight knockouts and a 12-round decision over Raphael Zumbano Love.

Originally from Puerto Rico and fighting out of Chicago throughout his pro career, Oquendo (37-8, 24 KOs) looks to capitalize on his fourth opportunity and capture a world title. The slick-boxer has faced a slew of top heavyweights throughout his career, including narrow decision losses to Evander Holyfield and James Toney, plus title challenges of Chris Byrd and John Ruiz. The 44-year-old owns recent victories over Derric Rossy and Joey Abell in addition to triumphs over Clifford Etienne, David Izon and Javier Mora.