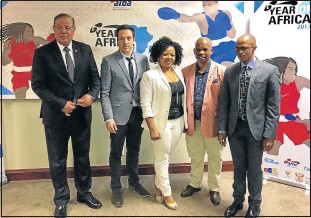 The programme is aimed at developing amateur boxing known as “Open Boxing” on the continent through a series of coaching courses for ring officials, as well as trainers.

Unlike as is the case in the professional ranks, qualified coaches are a prerequisite before they can be allowed to train a boxer in Open Boxing. But the continent has been lagging behind in this area, with trainers and coaches only in possession of Level Star 1.

While there are various reasons for the slow pace of qualification of African coaches, funding is one the fundamental challenges, as it costs about $100 (R1 249) per individual to undergo the course with no guarantee of success. In fact many coaches from the continent are failing the courses.

This has impacted on the performance of boxers from the continent at major international championships – such as the world championships and the Olympics.

Against this backdrop, Aiba president Ching Kuo Wu, undertook to address the imbalance by declaring this year as Year of Africa 2017.

The Year of Africa programme will be included on other sub-programmes such as the GlovesUp at national level and the HeadsUp, which will be rolled out throughout the continent starting in May in Togo.

Launching the Year of Africa programme in East London recently, Aiba’s Jean Jerome Mortier appealed to boxing stakeholders to embrace it as it will benefit them in the long run.

“This programme is looking to reach 750 000 across 12 regional hubs and 54 national federations,” he said.

The HeadsUp programme will include a truck with a mobile ring making several stops to identified African countries such as Togo, Congo, Zambia and South Africa.

After conducting 4 835 courses, Mortier said this number would increase coaching and ring officials’ qualification by at least 250%.

Conceived in collaboration with African Boxing Confederation (AFBC), the programme will be implemented by all its 54 national federations with education as its key component.

This will be achieved through regular visits to schools to encourage kids to follow a career in boxing.

Mofu was over the moon with the launch of the programme in the country – and, specifically in East London. “We all know that East London is the Mecca of boxing in the land and perhaps in the continent so it was befitting that this major milestone is unveiled here,” he said.

While the programme is expected to punch boxing into shape, there is still a challenge about the standard of African championships which ironically have been demoted by Sascoc – the country’s Olympic Committee – as Olympic qualifiers.

While Sascoc took flak from despondent athletes who secured qualification through the continent’s championships, the move appears to be geared towards improving the quality of SA athletes who are sent to the Olympics.

For instance, African boxers did not win a single medal at the London 2012 Olympics while the continent only returned with one bronze from Rio last year when Moroccan Mohammed Rabbi won the welterweight medal.

AFBC president Kalani Bayor who could not be present at the launch in East London said the programme would address such challenges.

“By targeting the grassroots, the Year of Africa programme offers the continent an incredible opportunity to develop that we must seize with both hands,” he said.

After making stops in Togo, Congo to coincide with African Championships, the HeadsUp truck will touch down in South Africa and East London in June.