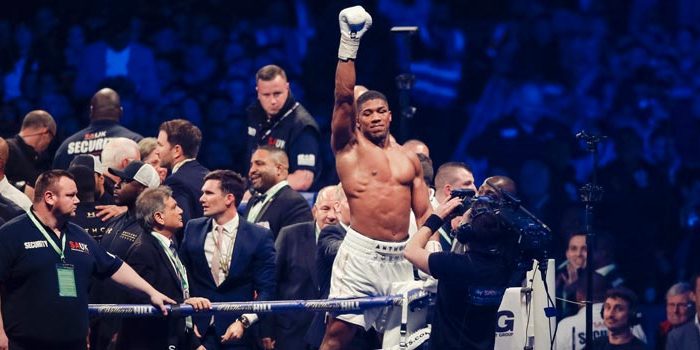 LONDON – Anthony Joshua was crowned the king of the heavyweight division Saturday live on SHOWTIME as he unified the division with an 11th round TKO of long-reigning champion Wladimir Klitschko before a record 90,000 fans at London’s Wembley Stadium.

Joshua, who remains a perfect 19-0 with 19 knockouts, overcame the first knockdown of his career to successfully defend his IBF belt and pick up the vacant WBA title.

Joshua knocked Klitschko down once in the fifth and twice in the 11th before referee David Fields stepped in to protect the defenseless former champion at 2:25 of the penultimate round. 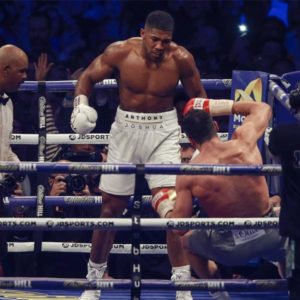 “I’m not perfect but I’m trying,” Joshua said.  “I got a bit emotional because I know I have doubters.  I’m only going to improve.  Sometimes you can be a phenomenal boxer, but boxing is about character.  When you go into the trenches that’s when you find out who you really are.

“As boxing states, you leave your ego at the door and you respect your opponent.  A massive shout out to Wladimir Klitschko for taking the fight.  I don’t want to say too much because I don’t know if he wants to come back and fight me.  He’s a role model in and out of the ring.”

After the fight, Joshua called out former heavyweight champion Tyson Fury, who dethroned Klitschko in 2015 but was subsequently forced to vacate his belts due to a number of issues outside the ring.

“Tyson Fury where you at, baby,” Joshua said.  “Come on – that’s what they want to see.  I just want to fight everyone.  I’m really enjoying this right now.” 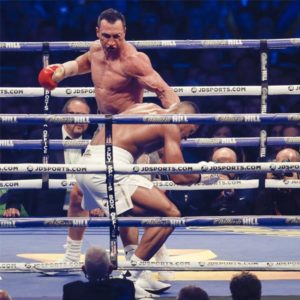 Klitschko floored Joshua in the sixth and was up on Steve Weisfeld’s scorecard at the time of the stoppage 95-93. The other two judges – Don Trella and Nelson Vazquez – had Joshua up 96-93 and 95-93, respectively.

“The best man won tonight and it’s an amazing moment for boxing.  Anthony was better today than I.  It’s really sad that I didn’t make it tonight.  I was planning to do it.  It didn’t work, but all the respect to Anthony.

“Of course we have a rematch in the contract.  I need to analyze and see what the heck happened.  I wish I could have raised my hands, but congrats to him.  He got up, he fought back and he won the titles.”