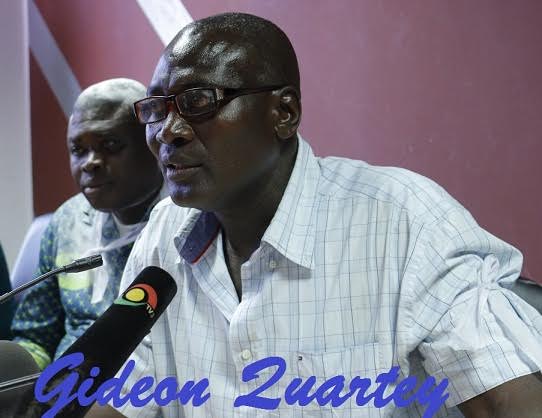 The sporting fraternity in Ghana has been hit with the sudden demise of Gideon Quartey the President of the Ghana Amateur Boxing Federation (GABF) which oversees the regulation and development of amateur boxing in Ghana.

Mr Quartey’s unfortunate passing dominated discussions at today’s Ghana Olympic Committee Congress, which he was supposed to attend. Reports indicate that he passed on after a sudden illness. As a result of the general mood of sadness, many of his fellow association presidents were unable to speak to Joy Sports when approached at the congress held at the Alisa Hotel in Accra.

Mr Quartey has been a big pillar in the development of amateur boxing in the last decade having played various roles and lifting the image of the sport. He set up Dade Boxing Promotions under which he operated a gym, The Dade Gym in La, Accra where he helped train talented boxers.

His efforts in talent discovery took him to the Northern Regions of Ghana where he was able to do a lot of work. In the mid 2000s Mr Gideon Quartey was tasked to act as Chairman of the Greater Accra Amateur Boxing Association, after the substantive head vacated the position. He was to make major impact in the sport with the introduction of the Greater Accra Amateur Boxing League, a concept which he had already started on a smaller scale with personal resources.

The story of the use of his personal resources to fund the sport continued as Mr Quartey sacrificed to keep the league running. Every Friday at the Prisons Canteen there were amateur fights in different weight divisions. This helped the young talented boxers a great deal as they were able to improve their records and also improve their technique and general skill.

With regular coverage in the media, with whom Mr Quartey had developed a cordial relationship, the league attracted many people to the Prisons Canteen. They included, high ranking government officials, corporate people, chiefs and staff of the prisons service who resided within the area and many others. Through the impact made bits of support started trickling in. For instance at one of the Regional Finals the then Chairman of the Ghana Boxing Authority, Lawyer Moses Foh Amoaning, donated bags of rice to be distributed amongst the best boxers. Not only that a beverage distributor donated some drinks to be used as prizes.

Though modest it was a good start and was appreciated by the boxers and the respective trainers, especially as the sport was also suffering a chronic lack of support. Boxers who fought on that stage include newly crowned WBC International  gold bantamweight  champion Duke Micah, Sulemana Tetteh, Azumah Mohammed, Annang Ampiah and Habib Ahmed who will face Philip Kotey for the WBO Africa, super welterweight title on Friday.

During the period, Mr Quartey’s networking resulted in a relationship with the Haringey Police Amateur Boxing Team in the UK. The team visited Ghana and had a successful tournament tour of Ghana. Following this, the then select Greater Accra team, earned an invitation to participate in the Haringey Boxing Tournament in the UK but were denied visas, by the British High Commission. This development did not deter Mr Gideon Quartey, as he kept pushing to make the sport attractive.

The UK-based team had grown their relationship with Mr Quartey and the Greater Accra Association and appreciated the genuine efforts being made and the challenges confronting them on a daily basis. This resulted in the donation of a Boxing Ring to the Greater Accra Association. It took almost two years for the ring to be cleared from the Tema Port, because customs authorities refused a full waiver on taxes and clearing charges.

The Sports Writers Association of Ghana (SWAG) gave him a special award some years ago for his dedication and selflessness.

Gideon Quartey rose to serve as Vice President under the administration of Ambassador Ray Quarcoo until the latter’s resignation which eventually resulted in the election of the former as President of the Federation in 2015. He was also a Rotarian and served with the Rotary Club of Accra, Osu.